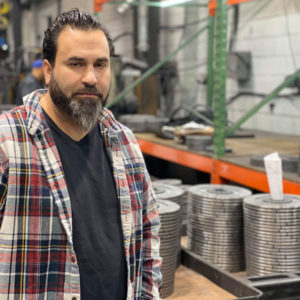 As a family-owned business started in 1988, Boninfante Friction, Inc. produces superior quality parts at competitive prices while setting standards for every market in which we compete.

In 2011, the family business changed hands, passing from father to son, and growth has increased under the next generation.

Rob Boninfante grew up in the company and although its core values have remained the same, the corporate scope has been widened to encompass second-to-none quality and value while also focusing on on-time delivery and customer satisfaction.

All of this is being monitored by sophisticated engineering and business standards that make us the world leader.

Boninfante Friction, Inc. is the world leader in friction clutch manufacturing for the motorsports market.

WHY BONINFANTE? Because we are the BEST!

Many of the world’s quickest and fastest trust Boninfante. Win more races, set more records, and achieve more when you choose Boninfante.

100% OF ALL NHRA TOP FUEL & FUNNY CAR TEAMS USE BONINFANTE!

Our value is in our products’ performance, , and our ability to provide you with a custom clutch that is better than our competitors.

Ask yourself, what is a tenth worth on a 4-second racecar?

Our clutches are engineered to handle the extreme stress of a performance environment.

We custom build your clutch to work with your entire vehicle combination; this results in better durability, performance and efficiency overall.

Our clutches are also backed by one of the best warranties in the industry.

We want you to be happy with our products and our service.

We have a knowledgeable technical staff, a friendly office staff, an excellent warranty, a 90-day free adjustment period, and a commitment to provide you with the best clutch on the market today.

Your success is our obsession.

Best in the business! We won a lot of races with ProTorque converters in the car. ProTorque (Joe Rivera) is an innovator! Always looking to make a better (faster) product!

I have known Joe Jr for many years and I can tell you he is the real deal. He will do everything necessary to make sure your expectations are met and exceeded. I have personally served with Joe on a major industry advisory board and I can tell you he knows performance and he knows his product.  He is the PRO in ProTorque.

My bolt together Gen X rocks! Joe is fantastic to work with. My Jeep just goes faster and faster and ProTorque puts the power down!